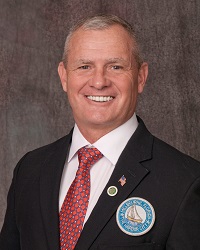 Tim Thomas represents Melbourne’s District 1 (view a map of Council Districts). He was elected to the Melbourne City Council in November 2016. His current term ends in 2020. He is also a member of the Orlando-Melbourne International Airport Authority Board.

Tim Thomas was born in Quincy, Illinois, but grew up in Pensacola, Florida. He attended Tate High School and played football for legendary coach Carl Madison. Tim graduated from Tate in 1983 and received a football scholarship to Marion Military Institute where he was selected for the Army Early Commissioning Program. Upon his Commissioning in 1985 as a Second Lieutenant, Tim served in the Alabama National Guard with the 20th Group Special Forces and the 117th Field Artillery Battalion while completing his degree at Auburn University in Montgomery (AUM). While at AUM, he worked as an intern for Republican Gubernatorial Candidate Guy Hunt helping him become the first Republican Governor of Alabama since Reconstruction. He graduated from AUM in 1987 with a Bachelor of Science degree in government and was selected for Active Duty service in the United States Army.

Tim served in the Army for 23 years and held numerous key leadership positions at the Bde, Division, Corps and Department of Defense level and served two combat tours in Iraq. He is also one of a few Americans ever allowed access into North Korea. In 1998, Tim and his Search and Recovery Team were allowed into North Korea where they recovered and repatriated the remains of six Army soldiers who were killed in North Korea during the Korean War.

Upon retirement in 2010, Tim was immediately hired by Viera High School to start up an Army JROTC program. Tim is in his seventh year as the Senior Army Instructor at Viera High School with 253 Cadets in the Army JROTC program, making it one of the largest in Brevard County. Tim is also very active in the community supporting homeless veterans through Operation Stand Downs and most recently helping students at Viera High School in securing passage of the “All American Flag Act.” He is a member of the Association of the United States Army, the Military Officers Association of America Cape Canaveral Chapter and the Republican Mentors Club of Brevard. His wife, Heather Thomas, is a dual sworn deputy with the Brevard County Sheriff’s Office. They have three children Tommy (23), Savana (19) and Dallas (14). They attend the Elevation Church in Melbourne.