24,000 Sandbags Distributed to Residents Ahead of Hurricane Dorian

It was a close one but thankfully, Hurricane Dorian spared Melbourne. At the time, that was far from people’s thinking.

With the storm bearing down and many expecting the worst, about 60 staff from various divisions made and distributed approximately 24,000 sand bags to help residents protect their property.

They started making the bags on Thursday, Aug. 29, using three automated sand bagging machines, which could each make four sandbags at a time. The bags, placed onto wooden pallets, were transported by large flatbed trucks to the dog track/Club 52 complex starting the next day. The bags were distributed on Friday through Sunday. There were 10 bags allowed per Melbourne resident.

Streets & Stormwater Acting Superintendent Dennis Burke reached out to East Coast Pallets and they generously donated over 200 pallets. “It would have cost us at least $8 per pallet otherwise,” Burke said. 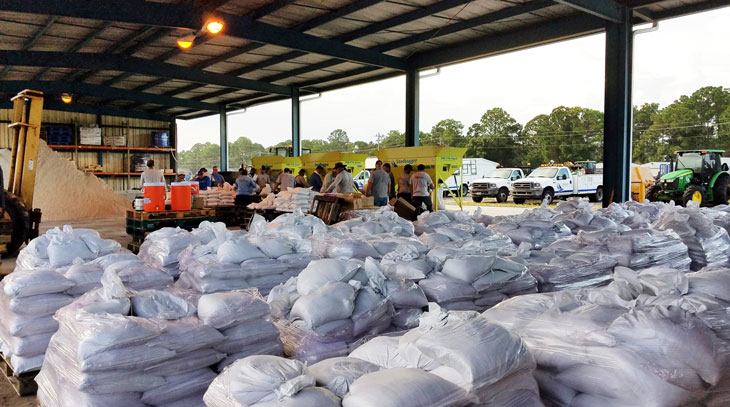 “It was a massive effort behind the scenes,” Burke said. That effort was recognized through numerous posts on Facebook. Many positive comments were received such as, “We got our sandbags and were very impressed by how well thought out and well executed this process was. Very impressive,” along with “Great job City of Melbourne employees! Always there for the community” and “Huge shout out to everyone working together. That was a very impressive and well oiled machine of a system they put together out there.”

Burke advises residents to hold onto the bags they received throughout hurricane season. Afterward, they can cut them and spread the sand on their yards.